Renewable Energy Surges to record Levels Around the World

New solar, wind and hydropower sources were added in 2015 at the fastest rate the world has yet seen, a study says. By Matt McGrath

Investments in renewables during the year were more than double the amount spent on new coal and gas-fired power plants, the Renewables Global Status Report found.

For the first time, emerging economies spent more than the rich on renewable power and fuels.

Over 8 million people are now working in renewable energy worldwide.

For a number of years, the global spend on renewables has been increasing and 2015 saw that arrive at a new peak according to the report.

About 147 gigawatts (GW) of capacity was added in 2015, roughly equivalent to Africa's generating capacity from all sources.

China, the US, Japan, UK and India were the countries adding on the largest share of green power, despite the fact that fossil fuel prices have fallen significantly. The costs of renewables have also fallen, say the authors.

"The fact that we had 147GW of capacity, mainly of wind and solar is a clear indication that these technologies are cost competitive (with fossil fuels)," said Christine Lins, who is executive secretary of REN21, an international body made up of energy experts, government representatives and NGOs, who produced the report.

"They are the preference for many countries and more and more utilities and investors and that is a very positive signal."

With China accounting for more than one-third of the global total, the developing countries outspent the richer nations on renewables for the first time.

When measured against a country's GDP, the biggest investors were small countries like Mauritania, Honduras, Uruguay and Jamaica.

"It clearly shows that the costs have come down so much that the emerging economies are now really focussing on renewables," said Christine Lins. 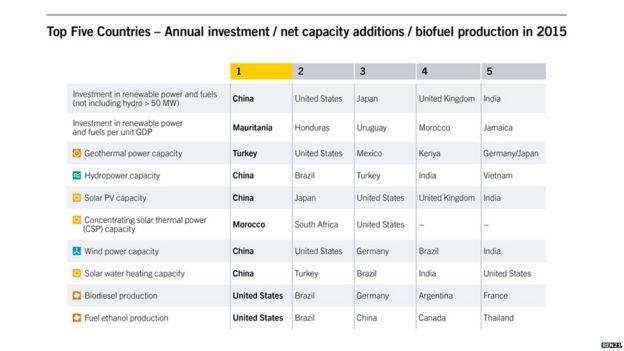 "They are the ones with the biggest increases in energy demand, and the fact that we had this turning point really shows the business case - and that is really a remarkable development."

The UK's high position in the global renewables table may come as a surprise to some as there have been a series of substantial cuts to green subsidies over the past year. The UK's solar industry saw tariff support tumble by over 60% last December.

Despite a significant fall off in European investment in renewables, down around 21%, green power is now the leading source of electricity, providing 44% of total EU capacity in 2015.

The authors say that while the Paris Climate Agreement came after this report was compiled, the fact that countries were getting serious about rising temperatures has already been reflected, to some degree, in their investments. As of early 2016, 173 nations had renewable energy targets in place.

It's not just nations that are taking big steps towards a greener future. In the US, some 154 companies employing 11 million people have committed to 100% renewable energy.

However there are still some areas that are proving resistant to green energy such as transport and heating and cooling. The low price of oil has contributed to the lack of uptake for renewables in these sectors.

Despite these holdups, the authors are in no doubt as to the direction of travel.

"I've been working in this sector for 20 years and the economic case is now fully there," said Christine Lins.

"The renewables industry is not just dependant on a couple of markets but it has turned into a truly global one with markets everywhere and that is really encouraging."

"The best is yet to come," she told BBC News.