Accelerating the Renovation of the Bulgarian Building Stock

Brussels, May 26, 2016 – A new analysis by the Buildings Performance Institute Europe (BPIE) sets out a long-term roadmap for further development of the Bulgarian renovation programme for multifamily buildings. Following the implementation of the programme’s first phase, the analysis argues for a shift in focus towards achieving higher energy classes, reducing at the same time the level of public subsidy in a measured and manageable manner. 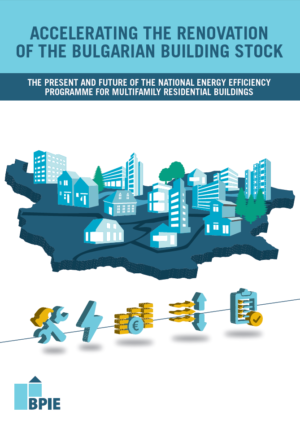 The study reaffirms that deep retrofitting to high energy efficiency classes is economically more beneficial than “shallow” renovation. It goes further by supporting the concept of “step-by-step” renovation, leading ultimately to a class A or nearly Zero-Energy Building. Such a phased implementation would prevent the “lock-in” effect of shallow renovations, which might deliver “quick wins” in terms of energy saving, but ultimately hamper the achievement of the full potential for economic, social and environmental benefits.

Several scenarios to 2030 were modelled, from which the writers conclude that reducing subsidies to around 75% is possible now. By strengthening further support measures, subsidies could ultimately be reduced to around 25%. In doing so, funding could reach many more citizens, improving their homes and increasing their quality of life.

In order to facilitate increased financial contributions from homeowners, simple and attractive financing mechanisms and incentives - appropriate to the needs of residents - need to be developed. These should be accompanied by other non-financial measures such as awareness-raising campaigns, building capacity throughout the supply chain and developing standardised solutions to bring costs down. Simplified procedures and measures to help homeowners through the application process will also reduce barriers and costs.

With most Bulgarian households currently under-heating their dwellings, one of the main outcomes of a mass renovation programme will be the improvement of comfort levels. This is a real benefit, and should be valued in the economic appraisal, according to the writers. Other benefits, including improved health, better air quality, alleviating fuel poverty as well as improved energy security, argue strongly in favour of continued support for this programme.

While this approach is indeed unique to the Bulgarian case, it may serve as an example for other countries in the region with a similar building stock profile and economic conditions.